TEGOX would like to inform our customers and partners that we will take a short-holiday due to Reunification Day & Labour Day.

Our office will be closed during this time. We are sorry for any inconvenience caused due to this holiday closure.

MITIGATION OF SALT STRESS BY FOLIAR APPLICATION OF PROLINE IN RICE

Rice (Oryza sativa L.) is a staple food for more than half of the world’s population. So it is imperative to increase rice production in different rice growing ecosystems to feed the increasing world population. It is also staple food for about 142 million people in Bangladesh. The total area and production of rice in Bangladesh are about 11.7 million hectares and 31.94 million metric tons, respectively. Although agro-climatic condition in Bangladesh is favorable for rice cultivation, rice production is being hampered in some areas of the country due to adverse situation such as salinity problem in coastal area of the country. About 15% of the cultivable area of Bangladesh is affected by varying degrees of salinity. At present, salinity is the second most widespread soil problem in rice growing countries after drought and is considered as a serious constraint to increase rice production worldwide. Recently, a number of excellent reviews have been published on the abiotic stress response and tolerance mechanisms and transgenic technology for developing crop plants tolerant to abiotic stresses. Among them, the accumulation of compatible solutes is one of the main adaptive mechanisms to salt stress in plants. Proline is the most common compatible solute that occurs in a wide variety of plants. Increased levels of proline accumulated in plants correlate with improved salt tolerance. Besides functioning as osmoprotectant, proline protects plants against salt or osmotic stresses by stabilizing many functional units such as complex II electron transport, membranes, proteins and enzymes such as RUBISCO, and by preventing photoinhibition. Salt stress induces the accumulation of reactive oxygen species (ROS) including superoxide radical and hydrogen peroxide in plant cells. The excess production of ROS is toxic to plants and causes oxidative damage to cellular constituents, leading to cell death. Plants possess enzymatic and non-enzymatic antioxidant defense systems to protect their cells against the damaging effects of ROS. It has been shown that proline scavenges free radicals and ROS. It is expected that up-regulation of the components of antioxidant defense system offered by proline protects plant against NaCl-induced oxidative damage. Proline improves salt tolerance in salt-sensitive rice by increasing proline accumulation and enhancing antioxidant defense system. In context of Bangladesh, very little is known about the protective roles of proline in rice responses to salt stress . Rice is central to Bangladesh's economy and agriculture, accounting for nearly 18.71% GDP (2009-2010). Therefore, development of salt tolerant varieties has been considered as one of the strategies to increase rice production in saline prone coastal areas. Hence, the situation justifies the need of undertaking a research study on the reduction of salt stress by foliar application of proline in rice to investigate the protective effect of proline on the yield performance of rice and also examine the effect of proline on nutrient content and uptake by rice under salt stress. 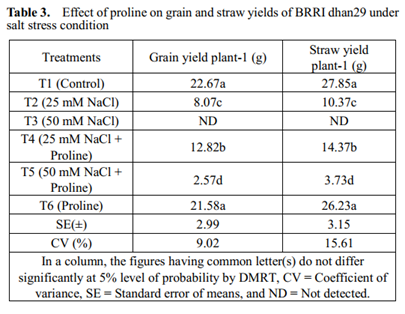 The overall results indicate that the growth and yield of BRRI dhan29 were affected significantly by different salt stresses. However, the foliar application of proline against salt stresses improved the growth and development of rice and resulted in increase the grain and straw yields to a significant extent. Therefore, it can be concluded that the salt stress can be mitigated by the exogenous application of proline in rice cultivation. Further, the experiment might be repeated in different locations with different rice varieties for making concrete recommendations.