TEGOX would like to inform our customers and partners that we will take a short-holiday due to Reunification Day & Labour Day.

Our office will be closed during this time. We are sorry for any inconvenience caused due to this holiday closure.

30 years of safe use

Glufosinate-ammonium was first brought to market in 1984. Today it is registered for use to control weeds in a variety of crops worldwide, including soybeans, corn, canola and cotton, which have been modified through genetic engineering to be tolerant to Glufosinate-ammonium. As a broad-spectrum herbicide, Glufosinate-ammonium acts against a wide range of annual and perennial broadleaf weeds and grasses. This also includes difficult-to-control Glyphosate-resistant weeds such as amaranthus, lolium, conyza and malva.

Its unique mode of action is a vital tool in weed resistance management, helping to improve crop health, agricultural yields and global food security when used as part of an Integrated Weed Management (IWM) program.

Unlike products with a root systemic mode of action, the herbicide can treat new branches emerging from the roots of a tree (suckers) selectively without harming the mother tree or vine, controlling weeds at the same time. This is of great importance for crops such as vines, tree nuts, stone fruit or olives (Source: What is Glufosinate-ammonium, 2020).

Glufosinate-ammonium is a plant protection product that works by inhibiting an enzyme central to plant metabolism. Plants absorb this substance primarily through their leaves and other green parts. As a contact herbicide, Glufosinate-ammonium is effective only where it comes into contact with the plant. This allows it to control weeds without affecting the roots or requiring tillage, which is important especially for erosion-prone areas such as slopes (Source: How does Glufosinate-ammonium work, 2020). 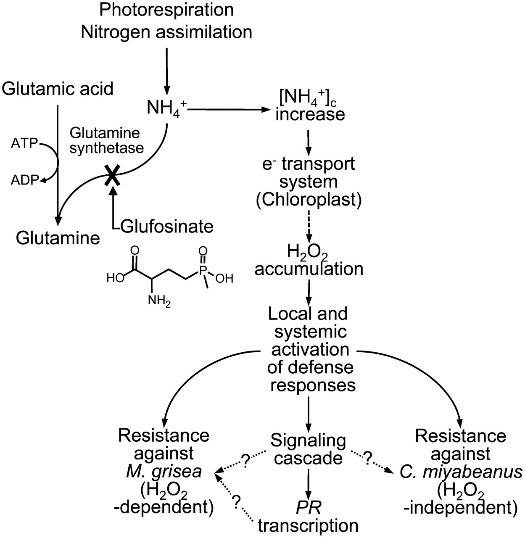 Effective against weeds while ensuring safety of crops

The primary mode of action of Glufosinate-ammonium is the inhibition of the enzyme glutamine synthetase. This enzyme catalyzes the synthesis of glutamine from glutamate and ammonia and plays a central role in plant nitrogen metabolism. This mode of action – unique among broad-spectrum herbicides – is key to mitigate developing resistance to other herbicides when used as part of an Integrated Weed Management (IWM) program. This includes the use of multiple herbicide modes-of-action as well as physical and biological weed control methods

If herbicides are not rotated due to limited availability or over-reliance on a few products such as Glyphosate, weeds that are naturally resistant will survive and propagate. The next generations will therefore have greater resistance, leading to significant crop damage.

The unique mode of action of Glufosinate-ammonium is an effective alternative to the commonly-used Glyphosate and other herbicides.

Additionally, Glufosinate-ammonium is a contact herbicide, which means that the active substance is only effective where it comes into contact with the plant. The herbicide is rapidly degraded in soil, avoiding that it enters ground water supplies. As only few treatments are needed per growing season, farmers avoid expending considerable energy and resources by applying multiple herbicides on the crop (Source: How does Glufosinate-ammonium work, 2020).

Glufosinate-ammonium was first derived from cultures of soil bacteria Streptomyces viridochromogenesa and was found to be active as a herbicide in greenhouse tests in 1976.

In many countries, Glufosinate-ammonium is also the only product on the market registered for the control of weeds and suckers – or new branches emerging from the roots of a tree – without harming the mother tree.